January 28, 2022
Home Prostatitis Be Prepared for All Symptoms of Prostatitis!

With a versatile demography and extremely wide etiology, prostatitis is a great problem for men all over the world. However, this menace is easily preventable in the vast majority of cases. Living healthily and cleanly drastically decreases your chances to get bacterial prostatitis types. Preemptive therapy for benign prostate hyperplasia immensely helps in preventing both chronic bacterial prostatitis and asymptomatic one. 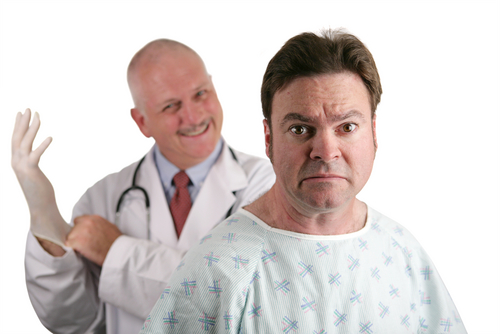 The main focus for this article are symptoms of various types of prostatitis. Note that different types of this issue have to be treated differently and manifest themselves through varying symptoms.

The list of prostatitis types and what may cause them you can find in this article about what causes the disease. There 4 main types of the condition: Acute Bacterial, Chronic Bacterial, CP/CPPS, and Asymptomatic Inflammatory. These 4 types cause somewhat similar symptoms, but there are distinct differences. Oftentimes, the consequences and prognosis also differ greatly.

Amongst the most general manifestations:

Note that many symptoms are similar to complications of benign prostate hyperplasia, but prostatitis is a much worse problem and may result into serious consequences. Do not simplify the issue or start self-treatment. Upon discovering the any of the symptoms listed above, seek for medical attention and consider undergoing a series of tests in order to diagnose the problem. Do not leave the issue unattended.

These are general manifestations that are characteristic for any prostatitis type. However, specific types may manifest themselves through a distinctly differing list of symptoms and can be immediately diagnosed correctly by a competent medical specialist. So let’s briefly talk about symptoms that accompany various types of prostatitis. 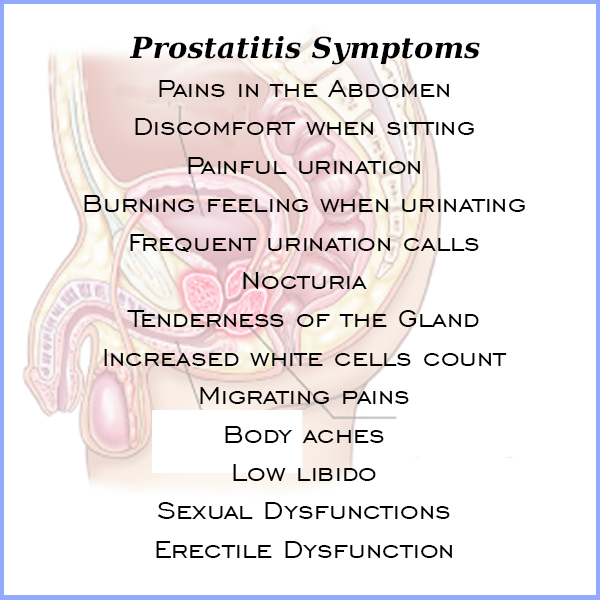 This issue is not the most frequent and occurs in less than 8% of clinical cases. Nonetheless, this condition is extremely dangerous and can result into a variety of complications while bringing to the table a bunch of truly discomforting manifestations. Amongst the most troublesome symptoms are:

All these symptoms are often accompanied by other manifestations. The richness of symptoms is dictated by the fact that Acute Bacterial Infection is often a consequence of a much more impactful and broader bacterial invasion that can affect multiple parts of your body. An infection can be carried to the organ by a dirty instrument during the biopsy. A course of strong antibiotics is usually all it takes to reduce the vast majority of symptoms.

When untreated, this type of prostatitis leads to dangerous complications and may result into permanent damage. In the vast majority of cases, pathologies and complications can be easily avoided. However, quick reaction to symptoms is imperative.

One of the biggest issues with this type of prostatitis is that it is reoccurring. The chances of the relapse are about fifty-fifty. There is no way to completely prevent the comeback of the disease. Avoiding issues with the bladder is the only way to ensure that there is no Chronic Bacterial Prostatitis return.

Chronic prostatitis and CPPS are often accompanied by a plethora of manifestations and some of them are characteristic only for these conditions. Symptoms vary in intensity and may change over time, but persistently present symptoms that usually manifest an infection is a nearly certain sign of a chronic prostatitis. The range of symptoms includes:

As the name suggests, the condition has from little to no easily detectable symptoms and often hides from diagnosis behind UTI and BPH symptoms. However, asymptomatic prostatitis is often a harbinger of cancer. The most common way to discover this type of prostatitis is through blood and prostate fluid analysis. An increased amount of white cells is a telling manifestation of the issue.

Note! Many prostatitis symptoms often accompanied by BPH symptoms. While there is no direct correlation between these issues, a healthier organ is way less likely to be inflamed and/or become a victim of a bacterial invasion. When the gland is healthy (due to preemptive therapy involving prostate massage and drugs), your urinary tract is less vulnerable and the prostate gland is not as easily inflamed.